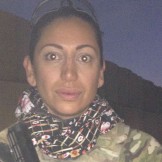 Assal Ravandi is the Founder and CEO of Mission Complete.  A former U.S. Army intelligence analyst and language instructor, Ravandi trained as a combat-qualified linguist and cultural affairs adviser and served for 9 months in Afghanistan.

Among her military honors and awards were the Afghanistan Campaign Medal, two Army Commendation Medals, the Army Achievement Medal, the National Defense Service Medal, the Global War on Terrorism Service Medal, the NATO Medal, and the Combat Action Badge.  However, Ravandi would say that her proudest distinction was simply serving with the 3rd Battalion, 7th Infantry Regiment.

A successful immigrant herself, Ravandi knows something about the difficulties of integrating into a new society. Identifying with the troops with whom she served, Ravandi realized that her new mission was to help Veterans from all backgrounds “connect the dots” between an honorable discharge and securing meaningful employment.   Through a range of contacts, connections, and cajoling – with the help of a series of business professionals, executives, and educational institutions –Ravandi coordinates the steps necessary to help every Veteran of any branch of the U.S. military ultimately transition, both socially and economically, into a fulfilling civilian career.

Get notified about new releases.